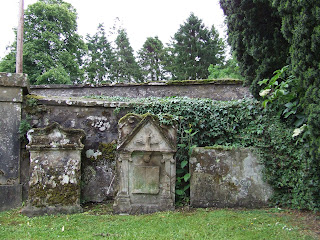 ( photo taken in Hamilton, Scotland, at the graves of some of the first Covenanting martyrs)

Perhaps no story in the Bible touches me more than the account of Martha's broken heart when her dear brother, Lazarus, died. Jesus had delayed coming to Bethany, even after the sisters sent for Him, pleading for Him to come and heal their brother who was on the brink of death.
(Those who persevere to the end of this post can click on a link to hear Glad, the Acapella Project singing!)

So when Jesus came, he found that he had already been in the tomb four days. Now Bethany was near Jerusalem, about two miles off; and many of the Jews had come to Martha and Mary, to console them concerning their brother.
Martha therefore, when she heard that Jesus was coming, went to meet Him; but Mary still sat in the house. Martha therefore said to Jesus, "Lord, if You had been here, my brother would not have died. Even now, I know that whatever You ask of God, God will give you."

Jesus said to her, "Your brother shall rise again."

Martha said to Him, "I know that he will rise again in the resurrection on the last day." 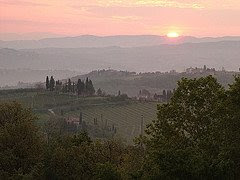 Some would be aghast at Martha's apparent scolding of the Lord--"Why didn't You come?" she seems to cry out in agony. "You could have healed him and we wouldn't have felt our hearts break as we watched our brother, who we know You love, die as we stood by, helpless."
But I have a different take on this. When we look carefully at Martha's words, we see that first, she calls Him "Lord," bowing to His sovereignty in her life. Secondly, she implies that she believes, even now, that although her brother has been dead for four days, Christ can raise him from the dead. She states, "Even now, I know that God will give You whatever You ask Him..."
You know the rest of the story. Jesus affirms His own deep grief over sin and death, especially the death of His dear friend,Lazarus, and perhaps thoughts of His own death which will come very soon. The shortest verse in the Bible is perhaps the most profound: "Jesus wept." He Who set the planets in their places, wept. He in Whom we live and move and have our being, sorrowed over His friends' suffering. And then, Jesus did what He came to do: He taught about the heart and character of the Father.

And so they removed the stone. And Jesus raised His eyes and said, 'Father, I thank Thee that Thou heardest Me. And I knew that Thou hearest Me always; but because of the people standing around I said it, that they may believe that Thou didst send Me." And when He had said these things, He cried out with a loud voice,
"Lazarus, come forth!"
He who had died came forth, bound hand and foot with wrappings; and his face was wrapped around with a cloth. Jesus said to them, "Unbind him and let him go."
Many therefore of the Jews, who had come to Mary and beheld what He had done, believed in Him. But some of them went away to the Pharisees and told them the things which Jesus had done.
Therefore, the chief priests and the Pharisees convened a council and were saying, "What are we doing? For this man is performing many signs. If we let Him go on like this, ALL MEN will believe in Him and the Romans will come and take away both our place and our nation."
But a certain one of them, Caiaphas, who was high priest that year, said to them, "You know nothing at all, that one man should die for the people and that the whole nation should not perish." Now this he did not say on his own initiative; but being high priest that year, he prophesied that Jesus was going to die for the nation; and not for the nation only, but that He might also gather together into one the children of God who are scattered abroad. So from that day on they planned together to kill Him. -- John 17:41-53

Someone has said that Jesus called Lazarus by name because if He had only said, "Come forth!", all the graves all over the world would have opened and those who had died in Christ would have been resurrected and borne testimony to the power of God over death! That glorious day will come--Jesus' resurrection guarantees it! Death, thou shalt die! 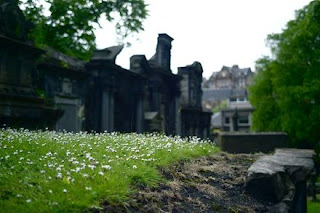 (Greyfriars' churchyard in Edinburgh where many Covenanters perished during the "killing times" in Scotland, during 1660-1688.)
I am reminded of one of my favorite poems, first read to me by my beloved grandfather, Elihu Hiram Anderson, school teacher, storyteller and Presbyterian pastor.
DEATH be not proud, though some have called thee
Mighty and dreadfull, for, thou art not so,
For, those, whom thou think'st, thou dost overthrow,
Die not, poore death, nor yet canst thou kill me.
From rest and sleepe, which but thy pictures bee,
Much pleasure, then from thee, much more must flow,
And soonest our best men with thee doe goe,
Rest of their bones, and soules deliverie.
Thou art slave to Fate, Chance, kings, and desperate men,
And dost with poyson, warre, and sicknesse dwell,
And poppie, or charmes can make us sleepe as well,
And better then thy stroake; why swell'st thou then;
One short sleepe past, wee wake eternally,
And death shall be no more; death, thou shalt die.
--John Donne
[For those who are interested in poetry, a brief analysis of this poem follows--skip it if you just want to read it and leave the rest to someone else to digest!]
Title and Publication Information
The poem first appeared as “Holy Sonnet X” in a collection of 19 sonnets by John Donne (1572-1631). However, its title came to be known as “Death, Be Not Proud” (after the first four words of the poem) or simply as “Death.” It was written between 1601 and 1610–the exact year is uncertain–and published after Donne died.
Type of Work
"Death, Be Not Proud" is a sonnet (14-line poem) similar in format to that established in Italy by Petrarch (1304-1374), a Roman Catholic priest who popularized the sonnet form before it was adopted and modified in England. Petrarch's sonnets each consist of an eight-line stanza (octave) and a six-line stanza (sestet). The first stanza presents a theme, and the second stanza develops it.
Rhyme Scheme and Meter
The rhyme scheme of "Death, Be Not Proud" is as follows: ABBA, ABBA, CDDC, EE. The meter varies, although most lines are in iambic pentameter.
Theme
“Death Be Not Proud” is among the most famous and most beloved poems in English literature. Its popularity lies in its message of hope couched in eloquent, quotable language. Donne’s theme tells the reader that death has no right to be proud, since human beings do not die but live eternally after “one short sleep.” Although some people depict death as mighty and powerful, it is really a lowly slave that depends on luck, accidents, decrees, murder, disease, and war to put men to sleep. But a simple poppy (whose seeds provide a juice to make a narcotic) and various charms (incantations, amulets, spells, etc.) can also induce sleep–and do it better than death can. After a human being’s soul leaves the body and enters eternity, it lives on; only death dies.
Figures of Speech
To convey his message, Donne relies primarily on personification, a type of metaphor, that extends through the entire poem. (Such an extended metaphor is often called a conceit.) Thus, death becomes a person whom Donne addresses, using the second-person singular (implied or stated as thou, thee, and thy). Donne also uses alliteration, as the following lines illustrate:
Line 4: Die not, poor Death, nor yet canst though kill me Line 6: Much pleasure; then from thee much more must flow Line 13: One short sleep past, we wake eternally (Note: One begins with a w sound; thus, it alliterates with we and wake.)Donne ends the poem with paradox and irony: Death, thou shalt die.
reference http://www.cummingsstudyguides.net/

Well-thought out entry with good links. I especially liked listening to the song.

Check the my accuracy on this detail, Becky, but I'm thinking your grandson Charlie and Donne share the same birthday - Jan 24th

You're right! My son-in-law, Grant S. shares the day as well. It was great to see part of your extended family today--miss those girls of yours though.