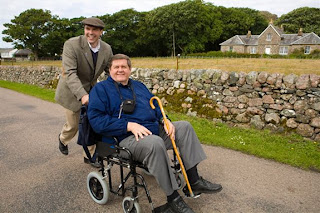 Joe and Bob Renaud on the Island of Iona in July of 2008.

“[Sotomayor] thinks that her job is to ‘empathize’ with the parties before her as opposed to judging ‘in righteousness.’”

Bob Renaud is in his final year of law school at the Oak Brook College of Law. He has authored or co-authored numerous articles, including a published law review article, dealing with law and public policy issues. He is currently writing a book on the proper understanding of the separation of church and state. 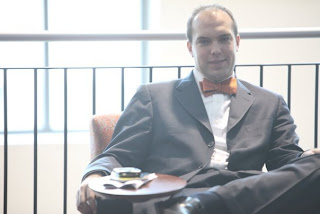 [My guest blogger for this post is our friend, Bob Renaud, who is in his last year of law school. Bob's excellent article appeared first on the Vision Forum web site recently. He is a prime example of how we moms hope our sons and brothers will grow up -- focused, smart, intuitive, a true Christian gentleman, a dapper dresser, and above all, devoted to pursuing a deeper understanding of God's Word and how to consistently apply it to all of life. (And, by the way, he's still single if you are an available, godly young lady ... oops, I think I'm in trouble for that unpaid advertisement!)]

President Barack Obama was just past his first “100 days in office” when David Souter’s retirement gave him the opportunity to submit his first Supreme Court nominee to Congress. He had been planning for this moment. During his campaign for the presidency, Obama explained what he would look for in a nominee to the high court:

President Obama reiterated his commitment to “empathy” last week when he commented on Justice Souter’s resignation. He promised to seek someone “who understands that justice isn’t about some abstract legal theory or footnote in a casebook.” Apparently, to President Obama, a basic understanding of the plain text of the Constitution is now “abstract legal theory.” But empathy, he says, will produce justice.

Once again, President Obama has demonstrated that the “change we can believe in” is not the change we need in this country. What we need is a change towards constitutional and biblical fidelity.

Writing in 1833 in his famous Commentaries on the Constitution, Supreme Court Justice Joseph Story explained that empathy is not the same as justice. Justice must be “freely, fully, and impartially administered.” Without impartial justice, “neither our persons, nor our rights, nor our property, can be protected. And if these, or either of them, are regulated by no certain laws, and are subject to no certain principles, and are held by no certain tenure, and are redressed, when violated, by no certain remedies, society fails of all its value; and men may as well return to a state of savage and barbarous independence.”[2]

By seeking to nominate to the high court, judges who “got the heart, the empathy” — as opposed to judges who are faithful to the law of the land — we are heading toward that “state of savage and barbarous independence” that Justice Story warned about. That was two centuries ago. Justice Story wasn’t the first.

Writing 3,500 years ago in the book of Leviticus, the ultimate Law-giver explained the proper role of judges:

In this text of Scripture, there is no reference to how judges feel about a matter, or how judges should “empathize” with the parties to the case, or even how judges should use their own ethnic background to decide the matter before the bar. The command is to “not respect the person of the poor, nor honor the person of the mighty.” Not feel their pain!
Contrary to what the ACLU or even the president himself might want, our legal system has codified this biblical command not to respect either the “poor” or the “mighty” in our own republic. The United States Code prescribes the oath that all federal justices or judges are to swear or affirm before performing their duties. The oath states:
I, [name], do solemnly swear (or affirm) that I will administer justice without respect to persons, and do equal right to the poor and to the rich, and that I will faithfully and impartially discharge and perform all the duties incumbent upon me as [job title] under the Constitution and laws of the United States. So help me God.[3]
President Obama’s nominee to the Supreme Court, Judge Sonia Sotomayor, was picked for her empathy rather than her impartiality. In fact, Judge Sotomayor has a record of showing partiality both in her written opinions and as well as outside the courtroom.
In a 2001 speech at the University of California at Berkeley, Judge Sotomayor said that the ethnicity and sex of a judge “may and will make a difference in our judging.” She went on to declare that “I would hope that a wise Latina woman with the richness of her experiences would more often than not reach a better conclusion than a white male who hasn’t lived that life.”
Fast forward to 2008, where we see how Judge Sotomayor applies her judicial philosophy of “empathy” in the case of Ricci v. DeStefano (now before the U.S. Supreme Court). In that case, local firefighters in New Haven, Connecticut, took an examination in hopes of getting promoted. When the results came out, the majority of those who took the test and passed were “white.” The town decided to disregard that exam. The firefighters who passed the test were passed up for promotion, and they sued the town for reverse discrimination. On appeal to the Second Circuit Court where Judge Sotomayor sits, Judge Sotomayor refused to examine the issues of the “white” firemen and threw out the case. So much for Judge Sotomayor’s “empathy” for both sides.

And finally, one cannot forget the gaffe committed in 2005 in which Judge Sotomayor explained at a Duke Law School forum that it is at “the court of appeals is where policy is made.” Isn’t that the job of the legislature? Judge Sotomayor caught her mistake and quickly said, “We don’t make law, I’m not promoting that, I’m not advocating that, you know.” However, you have to ask yourself, how does an “extremely qualified” judge make a mistake like that?

Jesus Christ said that “out of the abundance of the heart the mouth speaks.”
I think it’s clear where Judge Sotomayor’s heart is — she thinks that her job is to “empathize” with the parties before her as opposed to judging “in righteousness . . . thy neighbour.” And this is why she is disqualified to be our next U.S. Supreme Court justice.

Bob was an able and amiable companion on our Scotland expedition last June/July...here, we are rejoicing that we are realizing a life-long dream: we're on the ancient Isle of Iona off the mainland coast of Scotland.
Posted by Becky at 2:38 PM