Today I had a rare privilege. I was able to give back a little of the encouragement given to me as a child of eight. How well I recall standing in my little choir, softly singing along with my friends and wishing with all my heart I could sing like my teacher, Mrs. Matherly. Her eyes sparkled and her voice rang out with enthusiasm and joy. I wanted to be her; but I was shy and embarrassed. After class, she called me aside. 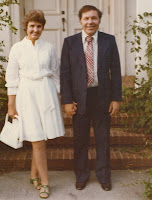 "Becky," she said in a kind but firm voice, "You have a beautiful voice but you need to sing out--sing like you mean it. I can barely hear you. God has given you a gift and you need to use it for His glory, honey." She continued to coax me throughout the years that she remained in our church, a church where my grandfather was the pastor.

This past Saturday, as I hurried to pack the car after a week-long stay with our daughter, Anne, in Augusta, my cell phone rang. I grabbed it on the last ring and waited to hear a friend or family member who wanted to know where I had been for a week and when I was coming home. Instead, I was amazed to hear the voice of a home-town friend I'd lost touch with for almost 40 years. "Becky," she said, "I got your number from your mother. Mrs. M. wanted me to try to find you. Stacey, her husband, died yesterday. Can you call her?"

I called her immediately and was amazed to hear the sad but same voice of my old teacher. Her grief was multiplied as she realized that she had no one to turn to for the funeral services--they had moved recently to be near her daughter because of her health conditions and those of her husband. They had no church connections in their new home which, amazingly, is only 20 minutes from my home. "I prayed for God to show me what to do," she told me with tears making her voice shake, "and suddenly, there was your face, like in a dream. Could you sing and maybe Joe preach?" she queried, her voice frail and full of sorrow and hope.

Her one request was that I sing Amazing Grace with a guitar since her husband loved guitar. 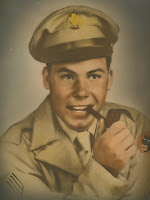 "Of course," I promised with groundless confidence. Little did I realize that everyone I asked-- about ten people--would be in class or working today. One last hope appeared, four hours before the service. "Jonathan, could you possibly break away for an hour and meet me in Woodstock?" This gracious young man (whose mother's funeral Joe had preached three years ago) agreed and provided guitar accompaniment to the song that has brought so much comfort to so many through the years.

Amazing grace, how sweet the sound,
that saved a wretch like me.
I once was lost but now am found,
was blind but now I see...
--John Newton

As it turned out, Joe and I were two of many representatives of my hometown, his adopted hometown. He first came to Haysi, Virginia, in 1965, as my grandfather Anderson's summer assistant and, because of my grandfather's poor health, officiated that summer at two funerals. One was for my dad's father, M. Calvin Belcher. The other was for my school-mate, Joan Ratliffe's father. Mr. R.'s brother was at the funeral in Woodstock today and 43 years later, expressed his gratitude once more to my husband. The friend who called to find me in Augusta was also grateful--Joe had performed her wedding 40 years ago. Several others in attendance remembered him as a dinner guest in their homes or befriending them and their relatives in times of need. Everybody told me how much I looked like my mother which made me happy indeed.
How wonderful to be able to be used by God to comfort and encourage those who have been a part of our lives, influencing us in ways we were not fully aware of at the time during those formative years. The young seminary student who took part in the service today alongside Joe is the grand-nephew, not only of the deceased, but of one of Joe's favorite Bible teachers in college and grandson of a bold preacher of the Gospel in SW Virginia who influenced my husband as a young pastor. Just maybe one level of God's providential hand involved influencing this tender-hearted, zealous young seminarian even as his relatives influenced Joe at his age.

In God's providence, we were able to give back today a little of what we were given as young Christians. As I looked into those dear faces today, I thought,"Who am I helping to shape and encourage in my moment in history, by words of encouragement, smiles and gentle reproach?" I praise God for the opportunity to say, "Thank you" to those who have given to me. May God bless someone by my faithful witness as well and may He receive all the glory.
Posted by Becky at 8:26 PM

Wonderful testimony! and prime example of how one never knows the depths of his/her influence.

That was written beautifully. What a wonderful story. Thank you for sharing it.

Thanks for the reminder to live every moment of our lives with Christ in mind...how one moment in history might shape the histories of count less others.

I love your stories, Becky. How wonderful is God's providence to have you there to comfort that dear lady.

Becky, you are always a blessing to others. I loved this testimony of how God brings back into our lives those whose lives have touched ours. God bless you.